Electrically engaged clutches or brakes require that electricity be supplied to a coil for engagement. While electricity is being supplied, a coil generates a magnetic field and the unit is engaged. The magnetic field is used to pull on an end plate, which squeezes a set of friction discs together allowing the clutch or brake to transmit torque.

When the electricity is turned off, the discs are separated by wave springs, and the clutch or brake is disengaged. An in-depth description of the actuation of each of our electric clutches and brakes is available on our actuation comparison page. 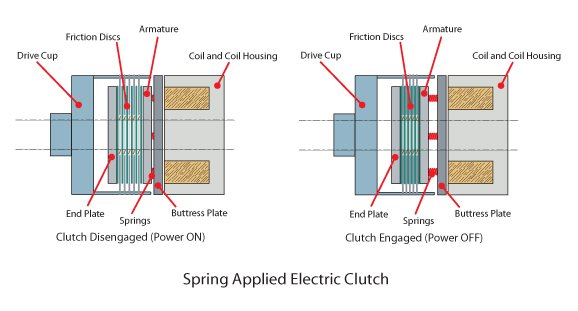 Electrically released clutches or brakes are engaged when electricity is absent from the coil. When electricity is not supplied (that is when the electrical power is OFF), springs are used to squeeze a set of friction discs together allowing the clutch or brake to transmit or arrest torque.

The unit is not disengaged until electricity is supplied. Under that condition, the coil generates a magnetic field which is used to pull an armature plate against the springs, overcoming the spring force and allowing the friction discs to separate. The discs are now allowed to spin freely without the ability to transmit or hold torque. 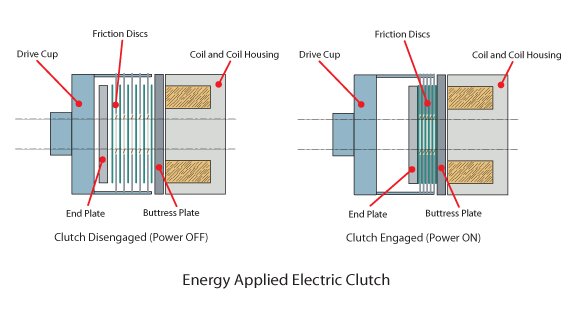 An in-depth description of the actuation of our spring applied electric clutches and brakes is available on our actuation comparison page.